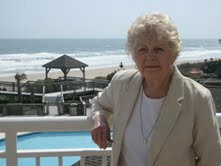 She was born in Los Angeles, California in 1929. She received her bachelor’s degree in Journalism at UCLA, and later certification in Public Relations at California State University, Long Beach. Her first marriage to the late Norman McLaren ended in divorce after 19 years, as did a brief second marriage to the late Del Smith. Diane retired to Wilmington, North Carolina from a career in display advertising, most recently from the Los Angeles Times, with her third husband (of almost 37 years) John Wills – a retired Los Angeles Fire Inspector. After moving from Long Beach, California they’ve resided in Wilmington over twenty years. Locally, Diane worked as a realtor for Adam & Hilliard Realty, and later Intracoastal Realty.

Mrs. Wills volunteered as a tutor for the Cape Fear Literacy Council and was active in her church, Holy Trinity Episcopal of Hampstead, serving on the vestry, as a member of Daughters of the King, and in various outreach committees. All who met Diane knew she was a lifelong and passionate lover of domestic animals, wildlife, marine mammals, and birds.

Diane was preceded in death by her parents James Donald Crawford and Dorothy Strohmeier Crawford Beck, stepson John M. Wills and three of her half-siblings.

The funeral will be held on Saturday, January 14 at Holy Trinity Episcopal Church in Hampstead at 11:00AM. Reverend Pamela Stringer officiating. The family will greet friends following the service.

In lieu of flowers, donations may be made to Holy Trinity Episcopal Church (Discretionary Fund), the Cape Fear Literacy Council, or any animal-welfare charity of the donor’s choice.