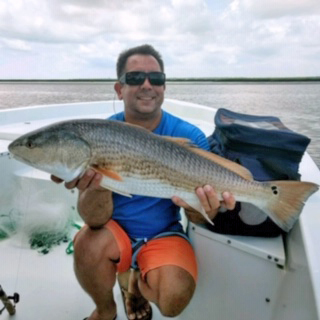 Our warrior, Daniel Langley passed away on October 5, 2019 from Gliosarcoma, a brain tumor nicknamed the Beast.  He fought the Beast for 16 months with everything he had. He died as he lived, surrounded by his family.

Daniel and Jennifer met in college in 1997, married three years later and went on to have one child; Tyler.  Daniel found his true calling when he became a father. His entire family benefited from his boundless love, endless patience, and energy for them.  Daniel, Jennifer and Tyler went on many adventures camping throughout NC, GA, SC and FL and traveled around the Carribean as well. He taught, guided, and showed those around him by his own example how to; navigate through the world, treat those around him with kindness and respect, live with a strong moral code, find humor in everyday life, and catch the big one, whether it was a fish or a wave.

Daniel was such a multi-faceted guy.  He was interested in all sorts of things like science, music, woodworking, mechanics, and electronics.  His two biggest loves outside of his family were fishing and surfing. He used these as an excuse to travel the world as well.

Daniel worked for many years as an engineering technician at Corning Incorporated.  The Beast shut that down for him far too soon and he tried very hard to get well enough and strong enough to get back to it.

To honor Daniel’s legacy and memory; reach out to help someone, treat those around you with humanity, dignity, and humor, catch that big wave, or take the time to go fishing. In that way, he will live on forever.  Daniel will stay in our hearts forever fishing, forever smiling, forever laughing, forever missed.

Join us for a celebration of life pig pickin on Sun Oct 13th from 2-5 at Marker 137 (175 Whippoorwill Lane, Wilmington, NC 28409).  We ask that you bring stories to share and your favorite beverage to raise a glass for Daniel.