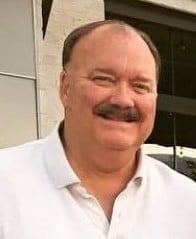 Daniel Kent Daniels was born April 7, 1957 – he was the first of five children born to Ron and Jackie Daniels. Since he was the first born, he felt it was his duty to be everyone’s protector. This trait followed him his whole life – he was a protector to friends, family and strangers until the day he left this earth. Danny grew up in Northwoods on a cul-de-sac on Cheyenne Road. He was a student at Infant of Prague Catholic School, Northwoods Park Junior High School and Jacksonville Senior High School. He was proud to be a “Cardinal” and it is rumored that he painted one of the water towers near the high school congratulating the “Class of ‘75”. Northwoods was the perfect place to grow up and it was here that Danny’s entrepreneurial spirit was developed. Mowing lawns and delivering the Jacksonville Daily News were his first jobs. When he would drive up and down Barnes Street, the main street on his paper route, he would hold his hand out the window, blow his horn and waive to all his Daily New Customers – and they all waived back to him.

To everyone in Jacksonville, he was “Danny.” If he saw someone in need, he would stop and help. He was late to his mother-in-law’s funeral because he stopped to help someone stranded on the side of the road. He was on the way to a job interview and his truck broke down at a traffic light in the middle of a rainstorm. As he was trying figure out how to get his truck running again without getting wet, there was knock on his window. It was someone who he helped in the past – recognized that Danny was in need and helped him get his truck running so he could make it to the interview. This is just a few examples of his willingness to help.

He worked hard for everything he ever had. He had an incredible work ethic. He made one of his first surfboards, he took a junk Fiat, worked on it in our driveway every day and made it into a great car. He started a trucking business from scratch – traveled all over and took our Mom along on many of his trips. He had a beverage distributing business that was a Segway into the soft drink and water business. He was a great salesman, getting in on the ground floor just as the bottled water business was taking off. After years of working for someone else, “Dan the Water Man” made a courageous decision to go into business for himself. He scoured auctions, sales and any where he could find equipment and built a bottled water plant from scratch. He was so very, very proud of this this. He loved to give tours that started from the source of the water – a spring on the property, to the finished product. It was very impressive.

Danny had a beautiful immediate family and a very large extended family. Danny and Karen’s children are so wonderful. He was so proud of everything that Kara and Corey had accomplished. He was lucky to have them in his life. Danny loved family vacations. Theme Parks and beaches were his favorites. Family vacations often extended to other family members and friends. The more the merrier was Danny’s motto. When Kaylin and Marin came along he loved having them come along for all the fun. Being “Papa” to them brought him so much joy. He loved them so much! They were everything to him. Weddings and family reunions were always more exciting when he was around. Never a dull moment when “Dan the Man” was in the room.

Danny was a force of nature, and he will be missed by everyone that knew him.