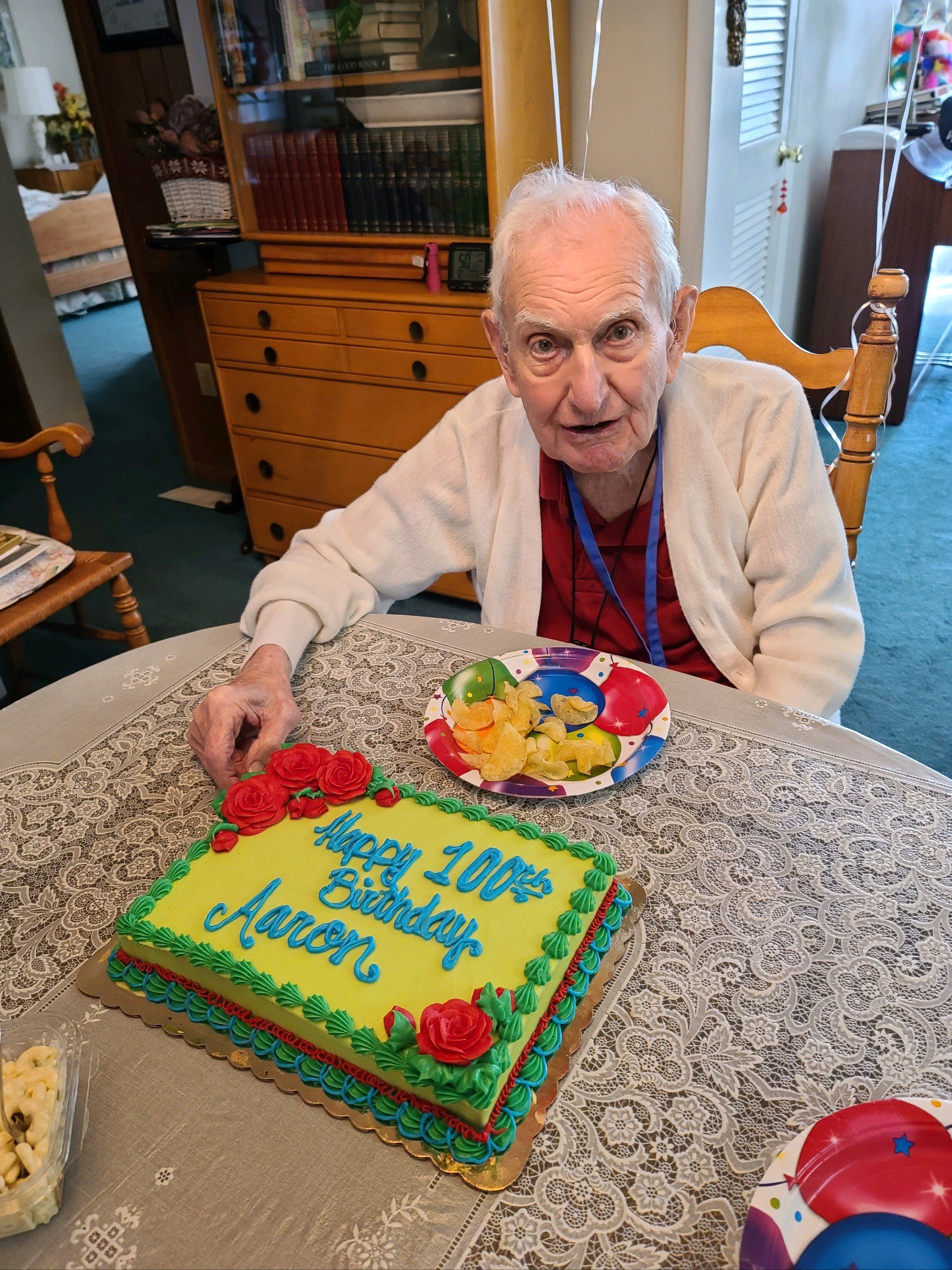 A celebration of his life will be held on Friday, May 20th at 11 am with visitation at 10 am. Hampstead United Methodist Church, 15395 US Hwy 17, Hampstead, NC. Rev. William Holiday presiding.

Dad was born in Estill Springs, Tennessee on January 7, 1921. He was the third oldest of ten children. Three girls and seven boys in a row. He was raised on a ten-acre truck farm in Estill Springs. He lived to be 101 years, two months, and 19 days old. Even at such an advanced age he was incredibly sharp. This he attributed to not taking a lot of medication, a healthy diet, mom taking such great care of him, and the love and care of family and friends. He survived three types of cancer. One of his doctors called him his “Miracle Patient”.

Dad was called to military service on September 21, 1942, during World War II. While serving in the US Army he was assigned to the 30th Infantry Division (The Old Hickory Division), Company C, 105th Engineer Combat Battalion. He was stationed at Camp Blanding, FL for basic and unit training. After basic training he was promoted to Sergeant as an Armorer Artificer, responsible for all weapons in the Company, replacing parts, etc. He served three years, one month, and ten days. Approximately half the time in Europe and the other half in the United States. He was in the Battle of the Bulge and all seven major military campaigns in Europe. Dad took the time to document his service in vivid detail. Friends and family marveled at what an absolutely fantastic memory for details he had.

After returning home from the war, dad went to work in Oak Ridge, TN, the home of the atomic bomb, for the municipal government of Oak Ridge. He worked in Public Safety and Health for 14 ½ years.

There he met the love of his life, our sweet, funny, and intelligent mother, Wandaline Sexton. Mom was a young teacher who had recently graduated from Tennessee Polytechnic Institute in 1949. They celebrated their 70th anniversary on July 14, 2021. Sadly, a month later mom passed. When they married on July 14, 1951, he said he was “30 years, 7 days, 8 hours, and 15 minutes old!” They were blessed with two children, Deborah Lynn Jones Musolino (Tony) and Aaron Maurice Jones, Jr.

When we were kids, our kids were active in and supportive of all our activities whether it was Boy or Girl Scouts Little League Baseball, church, or school groups. Dad especially had fun “assisting” with the Pinewood Derby, which Maurice won.

In 1960 dad received an offer to work for Government Services, Inc. in Washington, DC. He retired in 1986 after 26 years. Mom also retired from teaching a few months earlier. After retirement, they had a lot of fun traveling and meeting with the Mount Vernon Chapter of AARP. They took trips all over the country and Canada. Dad served as their President for several years with mom working tirelessly in the background. They developed many lifelong friendships with members of their church family, Groveton Baptist, in Alexandria, VA, and AARP after retirement.

When we recognized that they could no longer live without assistance we encouraged them to move to North Carolina to be closer to family. They absolutely loved their new church family at Hampstead United Methodist, the neighbors in their community of Coastal Plantation Estates, and the volunteers from Pender Adult Services who delivered Meals on Wheels. They welcomed with joy the many visitors they received over the years while living in Hampstead.

On dad’s 100th birthday he was surprised with a huge birthday party and parade as he and mom sat outside on the front porch enjoying the warm January weather. This was all made possible thanks to his wonderful “cousin” Randy and Susie Thrasher. The amazing community of Coastal Estates lined the streets while playing patriotic music, with members of their church family and friends in attendance.

Dad felt so honored to receive an American Flag and a citation which was presented to him by members of the Honor Guard of American Legion Post 167 in Hampstead. Dad was also surprised and humbled to be interviewed by a young man from WWAY TV in Wilmington, NC. He was featured in a story that evening.

“Cousin” Randy took dad to the VA Clinic in Wilmington for his Covid booster on December 15, 2021. There he was surprised with a reception from the staff and three television stations interviewing him! He was on WWAY TV, WECT, and Spectrum that evening.

After mom passed from a massive stroke, we knew dad couldn’t stay alone. A dear special friend, Karen Glenn, volunteered to stay with him in the evenings so he could stay in his own home. He had expressed numerous times that this was his wish. For this, we are so grateful. We also wish to thank Bayada Home Health Care and Home Instead.

In addition to his two children, he is survived by one brother, Gordon Jones (Pat) of Tullahoma, TN; sisters-in-law, Martha Ann Jones (Lawrence) of Estill Springs, TN, and Bobbie Jones (Alvin) of Winchester, TN. He absolutely loved all of his nieces and nephews, but David Tankersley, his nephew in PA, was especially near and dear to his heart. Dad was so grateful that David took the time to call him often and send him lots of Hershey Chocolates on special occasions. If you knew Dad, you knew he had a sweet tooth. He was preceded in death by his parents, Leslie Bryan Jones and Nora Florence Reavis; sisters Ethel Woodson (Charlie Joe), Pauline Tankersley (Edger), Carol Freeman; brothers Douglas (Nita), Claude (Mary), Lawrence, Norman (Lucille), and James Alvin Jones; and daughter-in-law Trish King Jones.

Also surviving are his wonderful Sexton in-laws, Annette Mouat (Tom), Donald Sexton, Rev. Landon Sexton (Fay), and very special sister-in-law Judy Hutchings (Ron). Judy coordinated dad receiving over 150 birthday cards on his 100th birthday! He had such fun opening each one. He is also survived by numerous nieces and nephews.

A very special THANK YOU to Karen Glenn, Bayada Home Health Care, and Home Instead for allowing dad to remain in his own home. In lieu of flowers, memorials may be sent to Hampstead United Methodist Church, 15395 US Hwy 17, Hampstead, NC 28443.