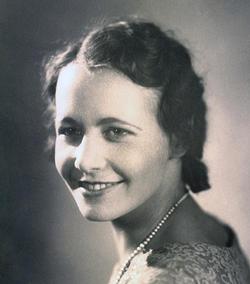 Aimee Alwina Ranzau (Born Winter) died at home Tuesday, January 14th, 2014, in the morning where she resided with her daughter in Wilmington, North Carolina. She was 99 years old, just shy of celebrating her 100th birthday.

The daughter of Mother, Aimee Concord Winter and Father, John F. Winter, one of New York City’s finest, police officers, was born in Astoria, Queens, New York on March 8th 1914. Her father would later retire from the force, moving his family to a farm once located on Chestnut Ridge Road near the then present Tyson’s Farm in Montvale, New Jersey. Where they would grow and sell flowers and fauna.

Aimee attended Park Ridge High School and was a graduate of the class of 1932 where she was a prominent member of the Glee Club. Upon graduation, Aimee would move to Rivers Edge on River Avenue in New Jersey. Where she sought and found employment with a chic clothing boutique specializing in designer women’s wear and helped develop her own sense of style.

Aimee would later reconnect with her high school sweetheart, William (Bill) J. Ranzau, and marry, giving birth to two daughters. Together they owned and operated a farm, “Ranzaus” in Montvale, New Jersey, growing and selling fruits and vegetables, both retail on a stand located on Chestnut Ridge Road, and wholesale in New York City. Later they built a gas station adjacent, the now newly designed station, Chestnut Ridge Exxon.

Aimee’s passion for singing, using her Soprano voice, would reemerge as part of the choir of the Evangelical Lutheran Church in Saddle River during the late 1930s.

Years passed and they would sell the farm and move to southern Jersey to a town called Milford, where Aimee cultivated her green thumb with a garden group, growing and cross breeding prize worthy Iris. She continued her love of singing with the choir there, at the United Church of Christ.

As empty nesters, retired, they moved to North Shapleigh, Maine, where they built their dream house on a lake and enjoyed making more new friends.

More than a decade later, wanderlust hit Aimee and Bill again, where they relocated to Hampton Bays, Long Island to be near their youngest daughter and a home overlooking the ocean.

Once again Aimee and Bill would move as a married couple, back to New England, this time to Putney, Vermont, where their eldest daughter resided, and she would become widowed.

Aimee kept busy with church, the First Congregational Church of Westminster, Vermont, baking pies this time and spending time with friends and family, the new addition her great-grandson. She would travel with her sister-in-law, Helen Radcliff, newly deceased, to Canada and the Caribbean on a cruise.

In 2002, Aimee relocated to Virginia to live with her daughter and later move to her final destination in 2012 to Wilmington, North Carolina where she enjoyed swimming in her saltwater pool and growing her favorite iris again

Aimee will be missed by the many friends and family young and old alike; she made traveling throughout her lifetime.

In lieu of flowers the family requests bequeaths be made to St. Jude’s Children’s Research Hospital or Alzheimer’s Foundation of America