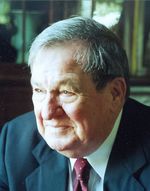 Allen was born October 29, 1920 in Franklinton, NC to the late Richard Thorpe Jones and Fannie Belle Allen Jones. He spent his childhood in Boydton, Virginia, Mecklenburg County and moved to Raleigh, NC when he was 16, following the death of his father. He graduated from Broughton High School, Raleigh. A veteran of WWII, Mr. Jones served in the US Navy in North Africa.

Following the war Mr. Jones began a career in Radio in Suffolk, VA and in 1948 came to Wilmington, NC to manage station WGNI in the heyday of Top 40 Radio. While in Wilmington Allen was active in civic affairs, serving as the 5th president of the Azalea Festival and played a role in bringing the battleship USS North Carolina to Wilmington. He also served St. Paul’s Episcopal Church as a vestry member and as Lay reader.

Mr. Jones continued his career in radio with The Tobacco Radio Network and Capital Broadcasting Company in Raleigh, until his retirement in 1983.

He was predeceased by his first wife, Sarah Weisiger Jones and a step-daughter Noel Chamberlin.

A private burial service will be held at the St. James Episcopal Churchyard in Boydton, Virginia.

Memorials be made to New Hanover County Library in his memory 201 Chestnut Street Wilmington, NC 28401.