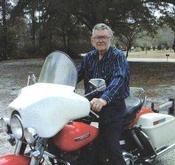 Mr. Lynch was born in South Hill, Virginia, to the late Benjamin Phillip Lynch and to Virgie Pearl Matthews Lynch. He was employed by FW Groves and Cape Fear Pallet as a truck driver. He loved motorcycles, horses, and racing.

In addition to his father, he was preceded in death by his daughter, Becky Rogers, and step-son, Max, Jr.

The family will see friends from 6:00 PM until 8:00 PM, Friday, at Wilmington Funeral Chapel.

In lieu of flowers, donations may be made to Lower Cape Fear Hospice Foundation, 1414 Physicians Drive, Wilmington, NC.