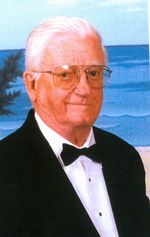 Mr. Archer was born in Watertown, N.Y., on October 16, 1921, the son of Leonard D. Archer and Elizabeth Moore Archer. He served with the Army Air Corps during WWII, and then returned to Cornell University, graduating with his class of 1944.

He worked for the Rand Corporation for 25 years, and later with the Veteran’s Administration. He lived most of his life in Maryland, where sailing on Chesapeake Bay was his passion in younger days; later golf replaced the more strenuous sport.

He was married to Margaret Gunnells Archer for nearly 50 years, until her death in 1994; they had a son, Thomas W. Archer and a daughter Susan A. VanEseltine. He later was fortunate to find love again with his second wife, Nancy Yenney Archer.

In addition to his wife and children, Al is survived by Tom’s wife, Teresa, and Susan’s husband, Richard; also his step-son, Jeffrey T. Spoeri. He leaves behind three grandchildren; John and Elizabeth Clark, Amanda Archer, and two step-grandchildren Andrew and Kendall Spoeri.

A memorial service will be held at St. Andrew’s On-the-Sound Episcopal Church, Tuesday, June 10, 2008 at 1:00 PM with The Reverend Richard G. Elliott officiating. There will be a reception afterwards in the Parish Hall, followed by interment at Oleander Memorial Gardens.

The family requests that in lieu of flowers, donations may be made to St. Andrew’s On-the-Sound, The American Lung Association or the American Heart Association.