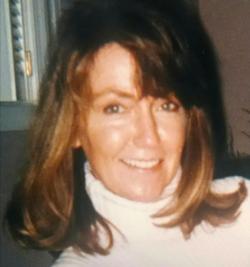 Andrea Gay Jenks Graves, age 70, of Wrightsville Beach, NC passed away Friday, August 1st at her home, her husband Dick Graves at her side.

She was predeceased by her father, John Alton Jenks. Besides her husband, she leaves behind to cherish her memory two brothers, John and Kirk Jenks; three sons Mike, Matt and Andy Graves; six grandchildren Caroline, Colin, Jack, Gabby, Keagan, and Rylan Graves; her aunt Bert McFayden; and her beloved mother, Sally Hatfield Jenks.

Andrea Gay, also known by her several nicknames, Andy Gay, Gay, Jenks, and Jenksie, was born June 24th, 1944 in Matewan, West Virginia in the presence of her grandparents Andrew and Gay Hatfield, both of whom she was named for. Her grandfather Andrew was the son of the ill-fated Ellison Hatfield, one of the first victims of the Hatfield McCoy feud along the West Virginia/Kentucky border. Her father, John Alton Jenks, was enlisted in the Army at the time of birth and met her 2 weeks later to take the family back to Camp Van Dorn in Mississippi. She grew up in Afton, NY and graduated from Afton Central School. She then attended the Woman’s College of UNC at Greensboro, UNC Chapel Hill, where she met her husband, and graduated from American University with a degree in Sociology.

Andrea and Dick made their homes in Chenango Bridge, NY, Sherman, TX, Colorado Springs, CO, Bethesda MD and eventually Wrightsville Beach. Along with raising three grateful sons, Andrea became a Girl Scout troop leader, Sunday School teacher, and after moving to Bethesda, settled into a professional role in Administration at her husband’s company, Ralph Graves Productions. Over the course of more than 25 years with the company, she forged long-lasting relationships with clients and vendors, sometimes traveled to shows, and became an important first impression for potential new business.

She will be incredibly missed by her extended family and friends, who are scattered throughout the many places she has lived. Especially missed will be her vibrant personality, sense of humor, penchant for playing endless games of Backgammon, and special connection with her grandchildren.