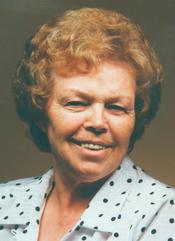 She was born in Dillon, SC on May 9, 1922. Her parents were the late Willie Robert Jackson and Annie Price Jackson. Remembered is her husband Arthur Woodrow Jackson who passed away in 1996.

The family will see friends from 6 to 8 pm Friday at Wilmington Funeral Chapel, 1535 S. 41st Street, where funeral services will be held 11 am Saturday officiated by Rev. Eugene Ridley. Burial will follow in Greenlawn Memorial Park.