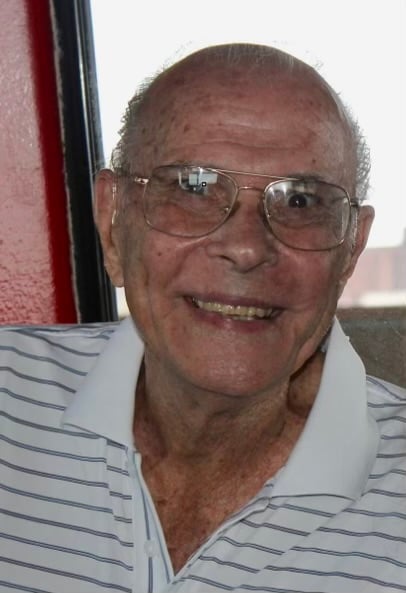 Arthur H. Romer Jr. of Wilmington, NC passed peacefully December 24, 2021 at the age of 95. Art was born in Washington, DC, the son of the late Arthur H. Romer and Alice G. Romer.

After graduating from Roosevelt High School, Art enlisted in the Navy and served aboard the USS Idaho in WWII, as a sailor and musician. After his Naval service, Art studied music at Catholic University where he fell in love with his soulmate, Grace L. Stout. They married in 1950 and started their family. Art began his construction career with Dustin Construction. He later went to work for E.A. Baker Co., a general contractor known for quality church, school, embassy and high-end residential construction in the Washington-Metropolitan area. Art worked for E.A. Baker Co. for over 40 years, advancing from laborer to company president. He enjoyed boating and fishing in the Patuxent River and the Chesapeake Bay. He took pride in being involved with the many home projects of his children. Later in life, he also enjoyed doing many woodworking projects of his own designs.

Art was preceded in death by his beloved wife, Grace, after almost 60 years of marriage and his sister, Rosemary Shaw. Surviving are his sons David (Carol), Darryl, and daughters Karen Johnson (Joe), and Karyl Dowd (Greg). Art has 8 grandchildren and 19 great-grandchildren. He will be remembered by the countless loving moments he spent with each family member. A special thank you is extended to the many caregivers for their compassionate service to Art.

A service of remembrance will be held at a future date in Wilmington, NC.

In lieu of flowers, contributions can be made to the Grace L. Romer Scholarship in Nursing Endowment.
UNCW c/o University Advancement
601 S College Road
Wilmington, NC 28403-5990