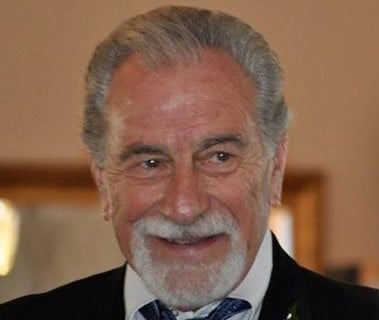 Arthur Nick Scarmeas was born in Detroit Michigan on December 14, 1932 to Katherine and Spiros Scarmeas. He passed away peacefully at home on April 14th with his beloved wife of 45 years by his side.

He lived an exciting life all over the world, bringing his humor and famous wit wherever he went. After serving in the US Army, he then attended Wayne State University where he found his passion working at the Michigan Epileptic Society. He later started at DP Brothers Advertising Agency writing film and commercial scripts. He met his true love Mary, who was working as a receptionist at an ad agency, Burton Sohigian Agency,  which led him to transfer to their office in Los Angeles in 1971. Art and Mary married in Carson City, NV in 1972. One of his fondest memories were the weekends he spent in Palm Springs with his wife. Arthur led an exciting film career as an assistant director and member of the Director’s Guild of America. He helped direct and also starred in commercials in the 1970’s and 80’s. During his many travels throughout Europe, Arthur discovered his love of fine Italian espresso. After taking a family vacation to Wilmington, NC in 1993, Art decided to leave the film business and move his family there to begin a new exciting career. He started a distributorship for Illy Espresso while simultaneously opening one of the few espresso bars in town at the time, Fontana Café.  He continued with the distributorship until he finally retired in 2008 at the age of 77. When his health would allow, Art loved to volunteer at the Surgical pavilion at NHRMC. Art was a devoted husband, father and grandfather who enjoyed time with his family, jazz music and desserts of all kind. Art always saw and brought the best out in people. A worldly man, he had a vast knowledge of different cultures and could “kibitz” in almost every language. Upon entering his home, he would always graciously serve anyone the best cappuccino in town.

He is survived by his wife Marilyn Scarmeas; son Nicholas and wife Jaime, and their daughters Leah, Stella and Toula; and his daughter Alex and husband Pete Ward, and their children Max and Maris; and his daughter Wendy and her husband Dallas Kidd along with their two sons and grandchildren. He was preceded in death by his brother James Scarmeas and is survived by his beloved family in Michigan.

A Celebration of his life will be held this Saturday April 21, 2018 from 5-7 at Creekside Yacht Club in Wilmington, NC.