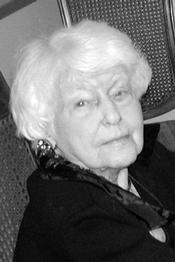 Born near Topsfield, Maine to Charles James and Ethel Bean James on July 22, 1917, she graduated from business school and worked for several years at Harvard University. In 1942, she married Grant Joslin from Arlington, Massachusetts. She became a Navy wife for the duration of WW II, and shortly after the war, the couple moved to Savannah, Georgia. Two years later, her only child, Richard, was born, and after several moves, the Joslins settled in Greensboro, NC, where they lived from 1954 through 1996, finally moving to Wilmington to live on Forest Hills Drive and more recently she resided at Brightmore.

She was a member of the Presbyterian Church of the Covenant in Greensboro and Winter Park Presbyterian Church in Wilmington. An avid reader, she was always ready to discuss books and tell stories. She was also a superb cook, and could always “get a meal together” from almost any ingredients.

She was preceded in death by her husband Grant, and a brother Arnold Bean James. She is survived by her son Richard Joslin and wife Anne; Charles James, a nephew who lives in Salisbury; grand-nephew Brian James and wife Wendy and their sons Benjamin and Noah, all of Wilmington; grand-niece Beth James Norris and husband Brian of Greensboro; and cousin Keith Springer and wife Adele of Zephyrhills, Texas.

A graveside service is planned for Sunday, February 19 at 2:00 PM in Greensboro at Westminster Gardens.