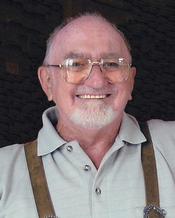 Gus was born in Germany and immigrated to the United States in 1956. He settled in Waterloo, New York, where he met and married his loving wife Irma in 1959. Gus was deeply grateful for his U.S. citizenship and frequently expressed his love for the United States.

After retirement, Gus and Irma moved from Waterloo to Elgin, South Carolina and then to Leland, North Carolina, quickly forming lasting friendships with many wonderful people. If walking with him, one would frequently have to wait as he’d be stopped, talking with a new friend. Gus was sincere, loving and giving. He enjoyed playing tennis, listening to music, writing poetry, and became a self-taught artist. One could not cross his path without being given a souvenir from one of his hobbies. Gus grew into a deeply spiritual man and looked forward to playing tennis in heaven with the angels, saying, “Playing tennis on the clouds is much easier on the knees.”

A memorial service to celebrate his life and spirit will be held at Woodburn Presbyterian Church in Leland, NC on Saturday June 30th at 11am, followed by fellowship with friends and family at the church immediately after the service.

Please share memories and condolences with the family by clicking on the “Sign Guest Book: tab above.