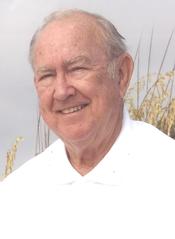 He was one of seven children of the late Homer and Ella Brock.
Avery grew up in Mt. Olive, NC and graduated fourth in his high school class and worked in his family’s business, The Mt. Olive Tribune.

Avery was drafted in June of 1944 and reported to the Naval Great Lakes Training Base in Chicago. He became a combat air crewman after training at Norman, OK, in addition he was in radar operations and was the honor graduate from Aerial Gunnery and Flight Engineering Schools at Banana River Air Force Base, Cape Canaveral, FL.

Avery serviced in the 12th Naval District Shore Patrol Personal Office until his honorable discharge from the Navy.

After his Naval service, Avery went to North Carolina State College during the institutions 61st commencement, he was awarded a Bachelor of Industrial Engineering degree

As a student at State, he was a member of PHI Kappa PHI, Golden Change, Blue Key, Order of 30 and 3, TAU Beta PHI, Theta TAU, Sigma PI Alpha, Society for Advancement of Management, Society of Industrial Engineers, YMCA, Baptist Student Union, Engineers Council, Public Lecturers Committee, Student Activities Fee Committee; Ex-officio member of Campus Government, Charter member of the Greater University Student Council, and Knight of St. Patrick. He was elected President of his Senior Class and Vice President of his Sophomore Class, and he was elected editor of The Technician, school newspaper and The Handbook.

In Reidsville, Avery served in varies capacities. He was on the board for Habitat, President of the Hospital Board, Wachovia Bank Board, Chairman of the Salvation Army Board, Lions Club, Chaplain for the Fire Department for 25 years, Citizens Advisory Committee and a Charter Member of the Citizens Economic Development, Inc. He was a member of the Board of Directors for the Salvation Army Red Shield Boy’s Club, Greensboro, NC, and graduated from the School of Business Administration at the University of Michigan, Management of Managers.

He sang in the church choir, was a Sunday School Teacher and a Deacon for First Baptist Church in Reidsville, NC. He also attended Lawndale Baptist Church in Greensboro, NC and sang in the Voices of Experience. He had a wonderful sense of humor, loved so by many and was a fine Christian family man. He will be greatly missed.

A memorial service will be held 2 pm Saturday, March 2, 2013 at the First Baptist Church in Reidsville, NC.

Memorials may be made to the Fellowship Fund at First Baptist Church, 409 S. Main St., Reidsville, NC 27320.