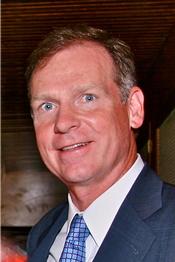 Benjamin Robert Williamson Jr., a resident of Manhattan, died in an automobile accident at Figure Eight Island, NC. On April 22,2012

Born September 18, 1956, in Raleigh, NC, Robert is survived by his mother, Blanche Bacon, and father, Bob Williamson, both of Raleigh, and by his wife of 24 years, Caroline Crook Williamson and their three children: Caroline Costner, age 20; Benjamin Robert III, 18, and Wyndham Josephine, 13.
Robert had an abiding interest in people of all ages and stations, loved to probe questions both big and small, and was gifted with a sunny magnetism that attracted many friends. He had a soft spot for his family. To be a close friend meant steady bombardment with e-mails about his children, usually with a selection of the photographs and videos he was always taking on family trips, at sports events and at class plays.

From childhood, Robert had a keen interest in business and started many enterprises, most famously, in his preteen years, a rabbit farm. Robert graduated from the Ravenscroft School in Raleigh, where he was the 2008 distinguished alumni and a member of the sports hall of fame, and in 1979 from the University of North Carolina at Chapel Hill. Following graduation, he worked for Sonoco, a paper products company, in Hartsville, SC, before going to Wake Forest School of Business and receiving an MBA with honors in 1983. Later that year, he joined Donaldson Lufkin & Jenrette in Manhattan as a stockbroker. In 1998 he joined Tiger Management, a New York City fund. In 2000 he co-founded his own hedge fund, Williamson McAree Investments, and, in January of 2011, joined Chilton Investment Co. where at his death he was a managing director.

As a New Yorker, Robert maintained his ties to the South, hosting a Christmas party with Caroline where Southern accents predominated, and attending the annual ball hosted by the North Carolina Society of New York, where he served a term as president. Robert played junior varsity basketball for Carolina, and he remained an avid Tar Heel fan. He gave time and money to many New York charities, including New Life of New York City, a faith-based youth outreach organization, where he was chairman of the board at his death, and Inwood House, where Caroline plays a leadership role. He was a longtime member of the Church of the Heavenly Rest, and at the time of his death was chairing the search for a new pastor.