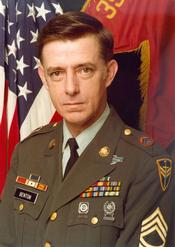 Benny Dale Benton (Buddy) died Saturday, March 19, 2011 at NHRMC after a lengthy illness, with family by his side.

Benny was born August 20, 1944 in Whiteville, NC to the late; Bonair and Estelle Benton. He was also preseded in death by his nephew, Bobby Benton, Jr. He is survived by his brothers: Bobby, Sr. (Bonnie) of Middle Sound, Jimmy (Gail) of Greensboro, and Billy of Wilmington.

Benny served his country for 25 years in the United States Army. He was a member of the 82nd Airborne Division, Fort Bragg, NC. Benny served two combat missions in Vietnam, one in Korea, Thailand, and the Dominican Republic. He was awarded 4 bronze stars for his service in Vietnam and the Dominican Republic. He received many more ribbons and metals throughout his military career.

After his retirement in the army; he settled down in the family home on Heritage Park Drive, Wilmington, and continued his education at Cape Fear Community College; earning degrees in Marine Diesel Technology, refrigeration and air conditioning.

Funeral Services will be Wednesday, March 23, 2011 at 2:00pm at the Wilmington Funeral & Cremation Chapel, officiated by the Rev. Chris Wroten.

Buddy will be dearly missed. Following the service, an informal gathering will be at the home of Bobby and Bonnie Benton in Middle Sound.

In lieu of flowers, memorials may be made to the Cape Fear Hospice 1414 Physicians Drive Wilmington, NC 28401 or ones charity of choice.