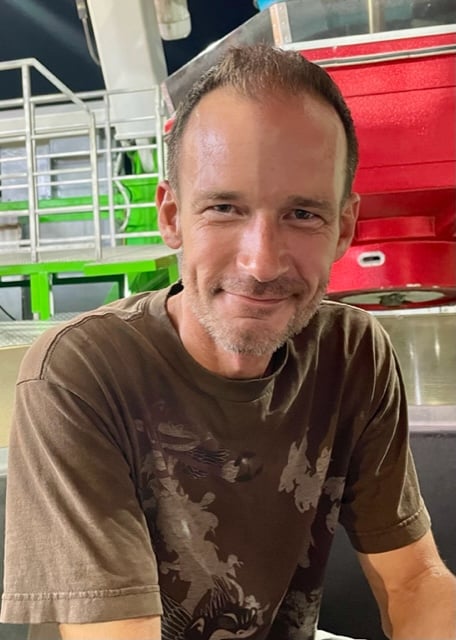 Brian Douglas Boggs of Carolina Beach, NC passed away on November 6th, 2022, at the age of 46.
Brian had a left handers creative sense and enjoyed drawing and writing from the time he was a young child. He had a love of music, likely inspired by his late mother’s love and skill of piano playing. His friends and family would describe him as humble, kind, humorous and giving. He would give the shirt off his back to help another in need. He lived his life detached from the need for material things but rather sought being present in the simple gifts of life often taken for granted. He could carry the world on his shoulders and still find thanks in his daily met needs. He had a wonderful sense of humor and could make others laugh. He had an ability to see the silver lining in difficult situations. He enjoyed lifting others up and making people feel appreciated.
He spent his last few years living in Carolina Beach surrounded by a great group of friends which he enjoyed playing music with, boating and fishing. His primary modes of transportation were by foot and bicycle which allowed him to slow down and savor the coast he called home. Often you could find him hanging on his front porch playing guitar. His time in Carolina Beach was spent making happy memories with his son Jake. They enjoyed summer days of walks on the boardwalk, fun adventures, swimming in all the hotel pools and grabbing slices at Fentoni’s Pizza, a favorite food for the both of them.
Jake was the love of his life.
He loved his family and friends and was very grateful for their love and companionship.
Raised in the small town of Graham NC, he attended Graham High School. One of his first jobs (and probably favorite ever) was at Keith’s music store. A progressive little music shop in Burlington NC where he spent years introducing others to various artists, they might not have prior known.
Bob Dylan was one particular artist that he seemed to introduce to several others. He and his sister Keeley attended several Bob Dylan concerts together over the years as well as many other various shows and festivals such as Smilefest, at its original location of Hodgin Valley Farm, Greensboro NC. A production of Not Fade Away Entertainment, which was a bit of an invitation only kind of thing when it first began.
Brian is survived by his father, Doug Boggs, sister Keeley Des Autels, son, Jake Boggs, and his niece, Ruby Des Autels. He was preceded in death by his loving and devoted mother, Carolyn Boggs.
He spent his last few days on earth with family and surrounded by love.
A Celebration of Life will be held at a later date, and everyone will be notified when those details are finalized.
*In honor of Brian please donate to the GoFundMe or to the NC Sea Grant program which funds rip current awareness. See more about NC Sea Grant below.
North Carolina Sea Grant facilitates funding for millions of dollars of research, outreach and education programs each year. Their initiatives and projects touch a broad range of topics, including fisheries, seafood science and technology, water quality, aquaculture, community development, law and policy, and coastal hazards.
Please leave memories and condolences for Brian’s family by signing the Tribute Wall below.
Services in care of Wilmington Funeral & Cremation – Wilmington Chapel – 1535 S. 41st Street Wilmington, NC 28403 910.791.9099.