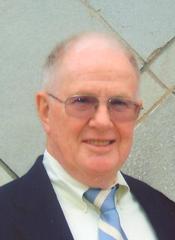 Burchard Andrew Sheehy, 74, of Wilmington, NC, passed away Thursday, December 15, 2011 at his home after a courageous battle with cancer.

Mr. Sheehy was born in Cincinnatus, NY on February 25, 1937 the son of the late James Edward and Shirley Baldwin Sheehy. He was preceded in death by three brothers and two sisters.

Mr. Sheehy was a graduate of Kent State University in 1964 and obtained his Masters Degree in 1967. He was a vocational school administrator in public schools in Ohio. He moved to Wilmington in 1998 from Steubenville, OH. Mr.

Sheehy was a member of Immaculate Conception Catholic Church where he served in the choir. He was master carpenter and left behind beautiful keepsakes. He was active in the HOA of Beau Rivage, and also worked with Habitat for Humanity for ten years.

The family will receive friends at 9:30 am Monday, December 19, 2011 followed by a Memorial Mass at 10:00 am at Immaculate Conception Catholic Church by Rev. John McGee.

A luncheon will follow immediately after the Mass at the church.