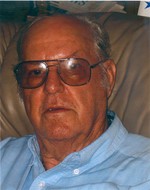 On Wednesday March 17, 2010, Calvin Ates (C.L.) went peacefully home to walk the streets of gold with His Lord.

He is survived by his loving wife, Sara C. Ates, children Ericka Ates of the home, Donald Ates of LA, James Ates, and wife Lorie of PA, Odessa Walbeck and husband Ed of PA, stepchildren Marie Dodge and husband Robert, Samuel Jones and wife Angel, James Jones and wife Kathy all of NC, Ray Shawdah of OK. Mr. Ates was preceded in death by his Mom, Dad, and stepdaughter Annette Hamilton. He was blessed to have 23 grandchildren, and 17 great grandchildren, all of which will miss him dearly for his humor and wit. Calvin Ates (C.L.) as he was known will be missed by his many friends.

C.L. Ates was born and raised in Pollock, LA, where he graduated from Pollock High School. As a Boy Scout he achieved the rank of Eagle Scout which he was very proud of. He was a member of the IBEW 576 Union for 37 years.

Sara Ates and the entire family would like to thank the staff of Huntington Health Care for their wonderful and thoughtful care which was shown to Calvin and family during his extended illness.

In lieu of flowers it is requested that donations be given in his memory to the Silver Lake Baptist Church,4715 Carolina Beach Road
Wilmington, NC 28412 where he attended and found a loving church family.