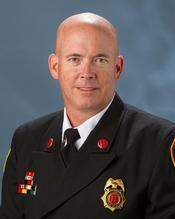 David was born on September 14, 1965 in Fort Polk, Louisiana, the son of Ralph and Pat Heath, of Concord.

David began his distinguished fire service career in 1984 as a volunteer with Bonnie Doone Fire/Rescue in Cumberland County. He was currently a fire instructor and training officer for New Hanover County Fire/Rescue and North Carolina Office of State Fire Marshall. Additionally, David attained certifications as a Nationally Certified Fire Investigator, Emergency Medical Technician, as well as numerous additional certifications. Most recently he was in the process of attaining his certification as an Executive Fire Officer and was awarded his Bachelor’s Degree in Organizational Development from Mt. Olive College in October, 2013.
David served for numerous agencies throughout his 30-year career including Durham Highway Fire/Rescue, Six Forks Fire/Rescue, Wilson Fire/Rescue, Raleigh Fire/Rescue, as well as Morrisville Fire/Rescue. David was heavily influenced by his uncle who was a career firefighter and assistant chief with the Wilson Fire/Rescue Department. He was lovingly known as “Wingnut” and “Torque Wrench”, referring to his character and work ethic.

David attended Port City Community Church, where he was an avid member. His second passion in life was that of surfing and the ocean.

Surviving, in addition to his parents are brother, Firefighter/Fire Instructor, William “Will” Heath and wife Dana, nephew, Lee Heath; niece, Lillianne Heath, all of Kannapolis; as well as many aunts, uncles and cousins. He also leaves behind his beloved cat, Lucy.