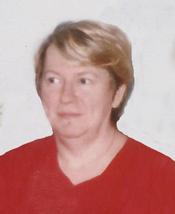 Born in Muskegon, MI on November 19, 1947, she was the daughter of Myrtle West Godbold of Wilmington and the late Robert Benjamin. She was a member of Immaculate Conception Catholic Church. Carol was the first paralegal in Wilmington and worked with Calder and Calder Attorney at Law. She made Prayer Shawls and donated them to Lower Cape Fear Hospice and also made hats for a pediatric oncologist in Florida for children with cancer.

A memorial Mass will be 9 am Tuesday, June 18, 2013 at Immaculate Conception Catholic Church with Father John McGee officiating. A Lazarus reception will follow the service at the church. Private inurnment will be in Greenlawn Memorial Park.

In lieu of flowers, memorials may be made to Lower Cape Fear Hospice Foundation; 1414 Physicians Drive; Wilmington, NC 28401.