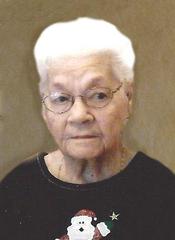 She was married to the late Morris Caldwell Weeks and they had five children. She kept a watchful eye on them as they began to grow by beginning her career in the Cafeteria at Forest Hills School. She later spent many years at the Dixie Restaurant in downtown Wilmington and at the Neptune Restaurant in Wrightsville Beach.

Surviving to cherish her memory are her four daughters, Jo Etta Weeks and Cassie Weeks of the home, Susie Wells of Burgaw and Libby Johnson of Cleveland, Tenn. Also remembered is daughter-in-law Jane Weeks. She was a loving “Nannie” to grandchildren, Ted Weeks, Jerry Johnson (Denise), Jodie Taylor, and Scott Wells (Shannon); to great-grandchildren, Brooke Weeks, Jerry Johnson III, and Savannah Wells; and to her special nieces and their children. In addition, she was an adopted mother and grandmother to many of her children’s and grandchildren’s friends.

Until her health failed her, she attended Devon Park United Methodist Church and loved both her church family and her pastor, William Pearsall for their unfailing prayers, cards and visits.

The family will be at the home of Jo Etta and Cassie.