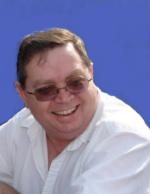 He is survived by his loving wife of 34 years Kathy Bordeuax and three loving children Chuck Bordeaux, Bill Bordeaux and Bri Bordeaux. He is also survived by his parents Charles and Barbara Bordeaux of Carolina Beach and his four sisters Kathy Agnor, Barbara Palo, Gloria Kohler and Linda Nance along with their lovingly supportive spouses and families.

Charles originated from Newark, Delaware where he met and wed his college sweetheart, Kathy Weaver Bordeaux on October 9, 1976.
Charles led every Cub/Boy Scout meeting, attended every camp outing and supported every scout as if each was his own son. He coached every baseball and softball game as though every team was full of allstar players. Players were there for fun and had the opportunity to play and shine for their families. As an honorable brother in the Federal Point Masonic Lodge #753 his spirit of service was demonstrated on a daily basis. Chuck was a active attendee of St. Paul’s United Methodist Church. He helped with the Angel Food Ministry, sang in the Choir and faithfully served in the Methodist Mens Group.