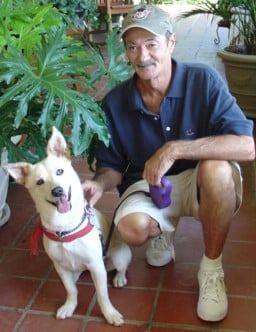 Chuck was born in Madison, WI to Victor William and Dorothy June Walters on May 25, 1950.

Chuck spent his early years living in Wisconsin, Long Island NY and Raleigh, NC but ultimately moved to the Atlanta, GA area where he went to college. Chuck excelled at selling and eventually started his own Office Supply Sales business. Later Chuck attended and graduated from John Marshall Law School in Atlanta. Chuck spent several years in Fripp Island, SC, eventually moving back to Atlanta before residing in NC in Boiling Spring Lakes where he enjoyed fishing at the lake by his home. More recently Chuck moved to Wilmington, where he remained until his passing. Chuck loved dogs, his latest being a rescue he named Honey who is 12. Honey is now in need of a loving home since the passing of her owner and friend.

Chuck is survived by his sisters Barbara Walters Biedenbach (Eddie) and Ann Louise Walters Martin, his nieces Tracy Biedenbach Frey (Greg) and Amy Biedenbach Brind’Amour (Rod), his grand-niece Riley Frey, and grand-nephews Mason Frey and Brooks Brind’Amour. He is predeceased by both his parents.