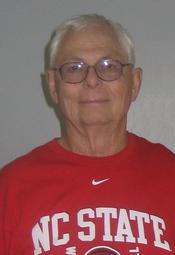 He was born in Raleigh on
October 15, 1931 to Luther
and Edrie Colvin Grissom.
Charlie was a passionate,
lifelong sports fan, playing
on his high school basketball
and baseball teams, and later
on the baseball team at his
beloved NC State University.

In May of 1950 he went to serve
his country by enlisting in the US
Air Force. There, he became a
member of the basketball team
at his Air Force base.

Later in life, he became a resident
of Carolina Beach, and was very
active in the community. He was
a member of the Police Advisory
Committee, helped with the
Boardwalk Committee project, was
a member of the hurricane damage
assessment team and chaired the
Planning and Zoning Committee
of Carolina Beach and Pleasure
Island. He was also very involved
in the holiday season with the Island
of Lights and the Flotilla, and he
played the island’s Santa for many
years. He was also a long-standing
member of St Paul’s Methodist Church.

Charlie was preceded in death by his
ex-wife LaVerne Crumpler Grissom,
with whom he had four children:
Chuck Grissom and wife Connie of
Raleigh, Mike Grissom and wife Laurie
of Holly Springs, Scott Grissom and
wife Mindi of Wilmington, and Sandy
Lloyd and husband Al Of Wilmington.

He is survived by his second wife,
Latrelle Barker Grissom of Wilmington
and three step children: Jeff Motley
and wife Emily of Maryland, Jennifer
Davis and husband Joe of Lumberton,
and Joel Motley and wife Tammy of
Virginia Beach, Va.

A celebration of life will be held at a later
date to be determined in July, at his
cherished Carolina Beach.

In lieu of
flowers, donations may be made to
the Carolina Beach Preservation fund
or to a charity of your choice.