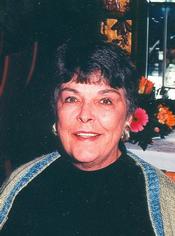 Chrissy was born in Hendersonville, NC to Thomas Daniel Clark and Emma Hutaff Clark. She was predeceased by her parents, a brother, and a son, Thomas Daniel Rountree.

Chrissy was full of life and enjoyed various employment, volunteer opportunities, civic duties, travels and many friendships over her 76 years. The special friends that she had in her later years made her declining health bearable. She especially enjoyed her Mah Jong group, the members of which went out of their way to make her feel loved. She made her four grandchildren a top priority in her life. Each was special in her eyes and she was always blessed by their presence. Her sister, Betty, was her rock through the years and someone she always turned to in her times of need.

The family extends special thanks to Shamika Watkins, who cared for Chrissy in her final years. Chrissy loved Shemika as another daughter.

A memorial service will be held Saturday, October 22, 2011 at 2:00 PM at Wilmington Funeral Chapel.

In lieu of flowers, the family requests donations be made to Lower Cape Fear Hospice ; or your local hospice.