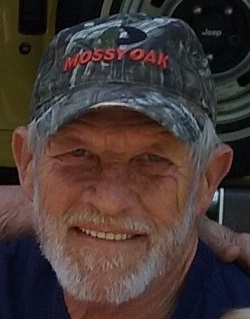 The day of love and roses ended in a day of heartbreak and tears for my family. The man that was fondly referred to as Husband, Dad, Brother, Grandpa, and Friend had a heart attack that took his life. The decision to go that night wasn’t his but in life there are many things that are out of our control.

My dad, Clayton Smith, was a relatively simple man. All he really required in life was his family, a fishing pole, some bait, coffee, and some snacks. He was not a man that lived for extravagant things; some of his favorite belongings were his stained/holey jeans, a plain tee shirt with a pocket, and his flannel shirt. He never understood why we gave him such a hard time about wearing them because he was comfortable.

My Dad had a genuine heart with a lot of love. A man that was completely content on babysitting his 1 1/2 year old grandson Sebastian whenever possible and going to the pier to go fishing with his brother Dayton.

My dad wouldn’t say goodbye on the phone because it was too final, he would say toodle loo because it was funny. He could care less about a clean home when there was a food fight to be had.

He faithfully spent nearly 40 years with my mom, Deborah Smith. They had a typical life with ups, downs, and potholes along the way. They would drive each other crazy but you knew they always loved one another. Most of the stuff my mom did baffled him but he accepted it all because that was what she did. There were times she didn’t understand him but he was her partner in life and she rolled with it. They have many memories that they have shared with others and special secret moments that they hold dear.

My dad would secretly buy me Lays Salt and Vinegar potato chips when I was little because it was our special thing. He taught me how to fish and loved every minute we would spend together. He taught me to love houseplants and how to plant a garden. My memories with him are never ending and priceless.

My dad was the man that my brother Robert Strait called Dad for most of his life. He was the one that taught Bob how to fish and spent many special moments together while enjoying the open blue sea.

He was the man that was the first true dad to my husband. He accepted him right away and happily handed me over to him on our wedding day. He told him that I was his problem now. My dad accepted Joe’s girls as his grandchildren from day one.

As grandpa he would take all of the time in the world to let his Grandchildren (Cory, Anja, and Ethny) talk to him about whatever was on their minds. He would take them fishing or just sit on the porch and talk to them. He taught Sebastian how to make crazy faces and his wrestler face and pose. He is the man that my children are going to be completely heartbroken to not have around anymore. He always had a stash of junk food that he would keep to share with them. Jokes and hugs went hand and hand with them.

He would take anyone that wanted to go with him on trips in his semi when he was working. It was because of him that I saw many states. My dad would stop at all of the Indian Rests that he would find while working to try and find a replacement Indian ankle bracelet with bells that I lost when I was little on our farm. He taught my mom how to drive a semi while she was riding with him so they could make it back home in time for Christmas.

His life was full and if there is anything else you want to know feel free to ask because there are too many stories to write.

He has left special people behind to share his stories. His wife Deborah, his brothers and sister Dayton, George, Patty. His in laws Jack and Nancy. His daughter Amanda, son in law Joseph, grandchildren Cory, Anja, Ethny, and Sebastian. His son Robert, his girlfriend Adria along with her children. His long list of family, Jacki, Mike, Steve, Shawnee, Wendi, Aaron, Sydney, Jonathan. Many special friends Ron and Pat Walker, Barb Bixler, Marilyn Boltenhouse, Lowell and Debbie Bixler, Patty and John Bond. So many more.

Special people he is reacquainting with, Franklin and Francis Smith, Paul Martin, and Sarah Rectenwald.

The family will have a Memorial Service at a later date.