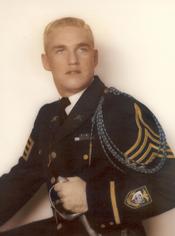 He graduated from McCallie School
earning a football scholarship to the Georgia Institute of Technology. Upon graduation as an ROTC Distinguished Military Graduate from Ga. Tech., he was commissioned a Regular Army Second Lieutenant of Artillery with a Bachelor of Science degree in Industrial Engineering and Management. After initial assignments as an ADA Platoon Leader at Cleveland, Ohio, he commanded batteries in the 2nd Rkt/Howitzer Battalion, 16th Field Artillery, 4th Armored Division, in Germany.

His subsequent assignments included instructor duties at Fort Bliss, Texas; Field Artillery Advisor in the Republic of Vietnam; Executive Officer of 10th Training Battalion, USAIS; and Executive Officer of 2nd Battalion, 10th Field Artillery, Fort Benning, Georgia. Colonel McAdams served with the Office of the Deputy Chief of Staff for Military Operations, Headquarters, Department of the Army. He then was a Field Artillery Advisor to the IV Iranian Corps and Chief of the War Plans Section, ODCSOPS, Headquarters, USAEUR.

From July 1975 to 1977, he commanded the 2nd Battalion, 78th Field Artillery, 1st Armored Division in Germany. He returned to the US in 1978 and was assigned to Headquarters, TRACOC, where he activated and was Director for Force Development and Modernization, Office of the Deputy Chief of Staff for Combat Developments. His last assignment was the Area V Commander, First ROTC Region, Fort Bragg, NC, consisting of 44 Senior ROTC and 82 Junior ROTC programs in the states of North Carolina and South Carolina.

His decorations and awards include the Bronze Star, Meritorious Service Medal with two Oak Leaf Clusters, the Air Medal, the Army Commendation Medal with three Oak Leaf Clusters, and the Department of the Army General Staff Identification Badge. He retired from the United States Army after more than 28 years of active commissioned service. He worked another 15 years as a JROTC Instructor at Loris High School, Loris, South Carolina.

Col. McAdams was preceded in death by his beloved wife of 54 years, Sandra Gay McAdams; and his parents Leonard James McAdams and Mary Molivia Crawford.

Interment will be held at Arlington National Cemetery at a later date.

In lieu of flowers, memorial donations may be made to the “Support Our Troops” program of the Freedom Alliance Organization, 22570 Markey Court, Suite 240, Dulles, VA 20166.
www.freedomalliance.org