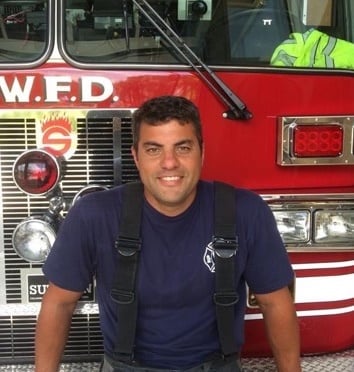 Dane MacPhail Waggett, 46, of Wilmington, NC, roller-boogied through the pearly gates of heaven on January 25, 2017, surrounded by a small group of the many lives he touched during his time on Earth.

Dane was born March 25, 1970 and spent his early years in the Wilmington-area where he attended school, graduating from Hoggard High School in 1989

Most recently Dane was a member of the Wilmington Fire Department where he served alongside his fire department family at Station Number 9 in Landfall. Prior to his meaningful work with WFD, Dane pursued a number of successful ventures that spoke to his passions and personality, letting no grass grow under his feet as he confidently pursued ideas and dreams that were uniquely his.

His proudest accomplishment was as a soul mate and husband to wife, Natalie, and phenomenal dad to their son Fisher. Dane was a constant presence in the life of his family, sharing his enthusiasm for sports as a coach to many of his son’s athletic teams. Dane loved God and took every chance he could to tell people how his life had been changed by God’s grace.

From an early age, Dane was a lover of all things outdoor spending as much time as possible in pursuit of an active life. He leaves many fish-tales and deer stands behind as a remembrance of the days he enjoyed in his favorite outdoor places with a host of wonderful friends.

Finally, a large and loving family will be left to honor Dane’s legacy. Survivors include his father and second mother, Warren and Gwen Waggett, his mother, Donna Plunkett Waggett, his brothers, Chris and wife Hulya, Michael, Jonathan, and Michael Griffin and wife Suzanne as well as mother and father in law Frieda and Milton Utley. Dane also leaves behind a nephew, Connor and two nieces, Madison and Davis.

THE FAMILY WILL SEE FRIENDS FROM 2:00 PM UNTIL 4:00 PM SUNDAY AT WILMINGTON FUNERAL CHAPEL. Casual attire is acceptable.

The family will honor Dane’s wishes for a burial at sea later in the week.

In lieu of flowers the family requests memorial donations be made to the Dane Waggett Legacy and Fisher Waggett Scholarship Fund.

Memories and condolences may be left on Dane Waggett’s online guestbook by clicking on the “Post a Condolence” tab below.