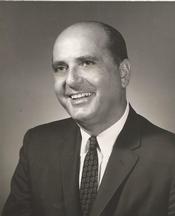 Born December 2, 1921 in Greenville, NC, he was one of 10 children of John and Olga Saieed, owners of Saieeds Department Store in downtown Greenville.

Dan graduated from Greenville High School and attended East Carolina College and the University of Richmond Business School. He was a prominent figure in the Jr. Chamber of Commerce acting as President and Junior Chamber International Director. He also received the Distinguished Service Award/Citizenship award and “Young Man of the Year Award” in 1955.

After moving in the 70’s to Raleigh, NC, he was involved in the manufacturing and distribution of modular office structures statewide. He was an early pioneer in this concept and advocated changes in city and county building codes to allow this innovative structural concept in many office centers. Dan retired to Wilmington NC, residing at Inland Greens in 1990.

Dan was an avid hunter, bridge player and golfer. He was an inspiration to his family and friends, living a full & vibrant life until he passed. Dan never met a stranger, enjoyed and took such pride in his family, but most of all adored his beautiful wife, Minnie, happily married for 67 years.

Dan and Minnie were members of St. Marks Catholic Church and were also associated with the Knights of Columbus in Wilmington NC.

The family will have a Celebration of Life at The Painted Horse Farm, 7708 Sidbury Road, Wilmington, NC, on March 30, 2013 at 1:00. In lieu of flowers, a memorial contribution may be made to Lower Cape Fear Hospice Foundation or a charity of your choice.