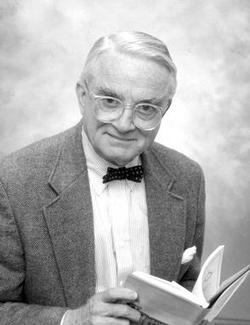 David DesJardins Hume died in Wilmington on February 18, 2015. He was born in New Milford, CT in 1928, graduated from Canterbury School in 1945, and then enlisted in the US Navy. He received a BA from Yale University in 1949 and an MA from Columbia University in 1950. After several years as a research assistant in The Citizen Education Project at Teachers College, Columbia University, he was appointed headmaster of Saint David’s School in New York City in 1953. He held this position until 1990, by which time he was the longest serving headmaster in the United States.

After retiring from Saint David’s School, Hume designed and built a small cruising sailboat and then wrote a book about it, Blueberry (A Boat of the Connecticut Shoreline). He also published several books about trips to Italy with his wife: Towns of the Renaissance, About Sicily, About Italy (Puglia to the Po), and Travels in Italy (Verona to Roma). He also published a novel, Beyond the Long-Eared Mountains.

Hume and his wife moved to Wilmington, NC in 1990, where he served on the boards of the Wilmington Concert Association and the Wilmington Symphony Orchestra, and was advisor to several local arts associations. Hume was also a painter and participated in the 2014 Art Show at the Cameron Art Museum.

Hume is survived by his wife of 61 years, Catherine Lewis Hume; sister, Rozanne Edmondson; 6 children and their spouses, and five grandchildren.

Services will be held at a later date in New York City. In lieu of flowers, memorials may be made to the local arts organization of one’s choice.