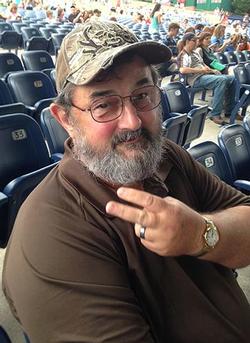 David was born in Wilmington on July 25, 1953. He was preceded in death by his parents, Quincy Futch and Danie Swart Futch, and a sister Diane F. Reese.

David lived his life in real time and “live action”. He had many loves and things that he cared deeply about. His number one love was his family and friends. No matter what was going on, his care and concern for them over shadowed everything else. He was a wonderful grandfather to his girls and enjoyed riding them on the 4-wheeler, doing craft projects for the holidays, swimming in the pool with them, taking them hunting. He watched many Barbie movies all in the name of love.

He had a great love for the outdoors. Being an avid hunter and outdoorsman he loved to share his skills with others around him. David was passionate about turkey hunting and he shared that passion with many as he taught them the ways of the turkey. lt was not unusual to see him giving turkey feathers to kids and teaching them how to sound like the animals in the woods.

He had a great love for his job at GE-which he worked at for 41 years! He cared deeply for “his men”. He was a supervisor that knew how to get things done but also knew the value of showing others respect, appreciation, and care.

For many years he coached baseball at Cape Fear Optimist Club. Many of his players are now grown with families of their own.

However, not many of them have ever forgotten Coach Futch. Everything that he did, he did with gusto. He did all things to the best of his ability and tried to instill in others the value of being the best that you can be.

David was unique in many ways. He would laugh and tell the children that he was the “brother of the bear”. Which they easily believed because of his size and bearded face. Being a compassionate and loving person, he never met a stranger. He held a deep and reverent faith in his heavenly father. He would laugh with you and cry with you.
He loved country music, hunting shows and war history. He held a sincere respect and honor for our military men, and was thankful for the freedom that we enjoy because of the sacrifice they made. He loved all of the holidays and greatly anticipated and enjoyed celebration dinners with family and friends.

David was many things to many people. However, the one thing that all would agree with, he made everyone around him feel loved, special and cared for. ln this world, there are not many people like David and there will be a huge void in the hearts of those who loved him and whom he loved. His legacy of life and living will be remembered forever!

In lieu of flowers please make a memorial donation to the Leukemia & Lymphoma Society.