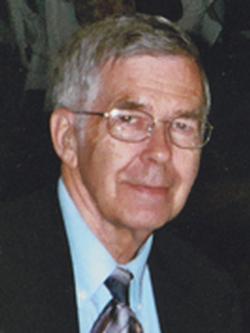 David Orville Halvorson died on Thursday, September 10, 2009, at the University of Wisconsin Hospital in Madison, WI.

David was born in Canby, MN, the son of C. Orville and Sigrid Halvorson on July 30, 1932. He grew up and graduated from Redwood Falls, MN High School with honors. He attended the University of Minnesota and graduated as a chemist with honors in 1955. He worked for E.I.

DuPont in Pitman, NJ and Beaumont, TX as a Research and Development chemist and became a Certified Industrial Hygienist in Wilmington, NC and continued his career with DuPont. He consulted for other companies, and the US military for several years and retired after 44 years. He was a chemist emeritus with the American Chemical Society and was a “Diplomate” and member of

He married his childhood classmate, Shirley Cervene, in 1951 and they had three sons and a daughter: Gary Vincent and wife Jill of TX, James David of WA, Michael Ray of WI, and Beth Halvorson Flack, who went to her Heavenly Father in 1987.

David was active in his church and sang in the choir since he was 14 until he became ill. His church families were Luther Memorial in Blackwood, NJ, Redeemer Lutheran in Beaumont, TX, Messiah Lutheran in Wilmington, NC and St. Paul’s Lutheran in Wilmington, NC. He participated in; as congregational president, treasurer, Stewardship Committee, Evangelism chairman, Sunday School teacher, choir, and bell choir member in his churches.

His hobby was Astronomy and he was active in the AAVSO (American Association of Variable Star Observers). He sang in various Oratorio groups and a Barber Shop Quartet and he loved music. He enjoyed playing golf, bridge, and square dancing.

David and Shirley moved to Verona, WI in 2007, where their son, Dr. Michael Halvorson lives.

Online condolences can be made at [email protected]