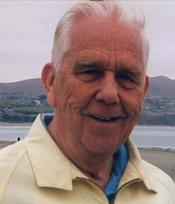 David R. Hogin, Sr., passed away peacefully May 25, 2012 at the New Hanover Hospital in Wilmington, North Carolina. He was 89 years of age.

David was born in Topeka, Kansas on May 5th, 1923 to Ralph McClellan Hogin and Loretta (nee Murphy) Hogin. He grew up in River Forest, Illinois with his parents and his brother Phillip. His father worked for the Santa Fe Railroad, ultimately serving as the Controller.

The family later moved to Scarsdale, New York, where David attended Scarsdale High School. He was very active in the Boy Scouts of America, and attained the rank of Eagle Scout. He excelled in high school, and graduated as the Salutatorian of his class in 1942. He then enrolled at Cornell University to pursue a five-year degree in Chemical Engineering.

In 1943, David enlisted in the U.S. Navy’s V-12 program. Under this program, he spent two more years at Cornell before going on active duty in 1945. David then deployed on the USS Turner in the Pacific Ocean during the last months of World War II. He was steaming towards Japan in August of 1945 when Japan surrendered. David was honorably discharged from the Navy in 1946 with the rank of Lieutenant JG. He then returned to Cornell and received his degree in Chemical Engineering. He excelled in the program, and was invited to join the Tau Beta Pi engineering honor society.

David began his career as a chemical engineer with Esso in 1950. He holds multiple US Patents including an apparatus for handling finely divided solid materials (1953) and another for a domestic heating device (1961.) He continued to work for Esso, later renamed Exxon, as a petroleum economist until his retirement in 1985.

On March 20, 1955 David married Robyn (Bobbie) Elze Conant of Scarsdale. Together they raised a family of five children in the suburbs of New York City, in Berkeley Heights, New Jersey, Sands Point, New York, and Darien, Connecticut. David and Bobbie moved to Wilmington, North Carolina in 1989.

David had a love of music and especially jazz. He played piano from an early age. After his retirement from Exxon, he had a second career as a jazz disc jockey. His Saturday Night Owl jazz program aired on station WHQR in Wilmington, during the 1990’s

He was a wonderful husband, father, grandpa, and friend. He will be sorely missed.

Services will be held at a later date, location to be determined.