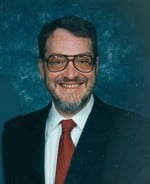 David was born in Wilmington August 15, 1947 the son of the late Perry Edwin and Louise King James. He graduated from NHHS in 1965. After graduating from UNC-W in 1971, he was featured in Who’s Who in American Colleges and Universities. After college he taught at Hoggard High. He loved the English language and enjoyed teaching Shakespeare, science fiction, writing and working with the many students whose lives he influenced. He retired from teaching in New Hanover County Schools in 1980 due to serious health issues but was grateful for the opportunity to work with young people, many of whom came to visit him in later years.
He began the next chapter of his life by helping to raise his infant son, Graham, who was born in 1983. David was always there for Graham, whether it was going for ice cream after school or being there for boxing matches in which Graham was involved. He was a loving husband and a gentle father.

The family will see friends 6-8 P.M. this evening at Wilmington Burial and Cremation Service.
Memorial mass will be 2:00 PM, Friday September 11, 2009 at St. Mary Catholic Church.

The family would like to thank all the many wonderful people who made David’s last days as comfortable as possible: Dr. Robert Johnson who was first and foremost focused on doing the best for David and who looked after him as if he were family, as well as David’s other wonderful doctors and nurses. Also, our deepest thanks to the medical staff in the E.R., the paramedics, the P.C.U. staff, the I.C.U. staff, especially Emily, the chaplains of NHRMC as well as all our friends and neighbors.