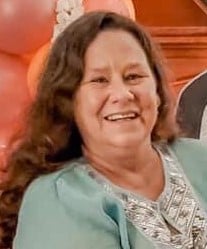 In the early morning of January 2, 2021, Debra Lyn Royal (Brown) unexpectedly passed away in the home of her mother due to a heart attack.

She was predeceased by her father, Larry Brown.

Debra, also known as Debi, was born in Lynwood, CA on November 13, 1965. After the Watts Riots, the family moved to Wilmington, NC when Debi was 2. This is where she grew up and spent most of her adulthood. As a child Debi as outgoing and always had something to say. In her teen years she participated in a variety of activities such as dance and the Civenettes. Even though she did not always show up, Debi graduated from New Hanover High School in 1984 with National Honors. She soon married and had her first child at 20 years old. She would not have her second until 10 years later. She was a devoted mother and an extremely hard worker. She co-owned a cleaning company with her mother name D & E Moppitts and was as a tax preparer for her stepfather’s company Tax Works. However, many people knew her as one of the best waitresses at the Waffle House in Leland. She worked there many years and even became a store manager. In 2012, Debi graduated from Miller Motte Technical College with an Associates in Billing and Coding. She enjoyed the work, but her heart called back to a little restaurant named Shuck n’ Shack where she would spend the remainder of her working years.

Debi always had a strong mind but a soft heart. Music was one of her biggest enjoyments. As a teen, AC/DC’s Back in Black could be heard throughout the house and as an adult Fleetwood Mac was played the same way. Her love of dance never quit either. In the 90’s, Debi could be found at her local country club where she would spend nights line dancing is her nicest cowboy hat. A revel at heart, Debi never followed the status quo and never judged anyone for their mistakes. She always told the people she cared about how much she loved them and was never hesitated to give a hug. Full of love and laughter, Debi will remain in the memories of her loved ones as a bright, smart, and caring soul. Her last months were spent caring for her mother which she regarded as one of the proudest times of her life. Along with witnessing both of her children become parents themselves. Family was Debi’s top priority. Her last wishes were to be set free into the ocean which was her favorite place to be.

Should friends desire, contributions in her memory may be made to 101 Deer Haven Court, Wilmington NC.