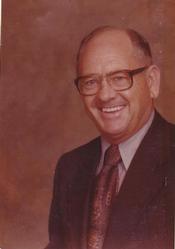 Delmer Wells,age 88, of Wilmington passed away on April 10, 2013 at Lower Cape Fear Hospice and LifeCareCenter. Three generations of his family and members of his extended family shared his last hours with sad hearts for all remaining and joy for the rewards he is receiving in his heavenly home.

Delmer was born in Pender County on February 22, 1925 to Goldie Lanier Wells and Crumpler Wells. He was pre-deceased by his brothers J.H. Wells, Colton Wells, Roy Wells and is survived by his sister Bertha Wells. After high school he entered the Army and fought in The European Theatre. He was captured during The Battle of the Bulge and served the rest of his military career in German Prisoner of War Camps. He was released at the end of the war and returned to Pender County and married Evelyn Lanier. After working as a farmer and later a long-distance truck driver, he began working for Orkin Exterminating Company in Winston-Salem, NC and later transferred to Wilmington as regional manager. Leaving Orkin, he owned and operated Wells Transmission Service in Wilmington and sold portable buildings. He was instrumental in establishing Cape Fear Group Homes for twelve mentally challenged adults and provided leadership for them as long as he was physically able to do so. In lieu of flowers, memorials may be made to Cape Fear Group Home, P.O. Box 4203, Wilmington, NC. 28406

His wife of 67 years, Evelyn Lanier Wells, survives him. He is also survived by his children Brenda Wells Sholar (Dr. Al Sholar) of Creedmoor, NC, Steve Wells of Ocean Isle Beach, NC; Dr. Ken Wells (Dr. Donna Stout Wells) of Manteo, NC; Brent Wells (Lidie North Wells) of Wilmington, and Scott Wells of Wilmington. His grandchildren are Angela Sholar Battle (Cleveland) of Oxford, NC; Melanie Sholar Dayer (Jim) of Creedmoor, NC; Lex Sholar of Raleigh NC; Meredith Wells of Washington, DC; Taylor Wells of Chapel Hill, NC; and Gracie Wells of Wilmington, NC. He has four great grandchildren, Trent Joyner, Cleveland Battle, Jr., Eva Sierra Joyner and Jimmy Dayer. This man was a loving husband, a caring father and a wonderful granddad and great granddad. While Delmer was without question a gentleman and known as a noble and humble man in his community, he was known by his family as fair, firm and fun.

The family will receive friends prior to the service at Winter Park Baptist Church on Friday, from 10:00 am until 11 am.

A Memorial Service will be 11 am Friday at Winter Park Baptist Church, followed by burial at Oleander Memorial Gardens with full military honors. Dr. Al Sholar, Rev. Eric Porterfield, Rev. Mark Teachey and Dr. Clif Harris will be officiating. The family expresses appreciation to the staff of North Chase Rehabilitation Center for their care for the past twenty two months, Cape Fear Memorial Hospital staff and Lower Cape Fear Hospice and LifeCareCenter for their compassionate care.

~When I think of my dad’s death, I think of the things I will miss – his laugh –so distinguishable from anyone else, the glow he had when he looked at mom, his children and his grandchildren. He loved family reunions, keeping his yard immaculate, eating good banana pudding, and being helpful to people – whether they asked him or not. He taught me a good work ethic, treat everyone fairly, finish the job you start and help the next person finish theirs. His love for his family was a model we have all tried to achieve and he told me recently he “was satisfied” and I am thankful I heard those words from his lips. Brenda

~My dad was very influential on my life and when I think about what I learned from him, what influence he had on me, three things seem standout from the rest. They were the love of being on, in, or around the water, teaching me to play golf, and instilling a strong work ethic. Whether we were water skiing, floundering, or just taking a boat ride, I loved every minute of it and still do. From him I learned how to swim, water ski, gig a flounder, pilot a boat, and respect for the water. He taught me to play golf, and I still play to this day. When I am playing I think about those Sunday afternoons he spent giving me lessons. When we played, I think he enjoyed fishing balls out of the water more than playing. I have very strong work ethic and it’s due to the example he set, his guidance, and his ability to make it fun. “If you are going to do something, do the best you can” was one of his favorite sayings. He was a role model with his work ethic. There were other things he taught me and shared with me, however these are the ones that had the biggest impact on my life. Steve

~My dad taught me how to swim and how to water ski all in one day. We were in Banks Channel at Wrightsville Beach when he slid the ski rope through the loops of my cutoff jeans and I jumped off the boat. As I swam, I did not know he slipped the rope out as I kept swimming. When I looked back, he was laughing, holding both ends of the rope high in the air for me to see. Now that I was full of confidence, he slid the skis across the water to me, and after two attempts, I was up and away.
We would ski for miles every time we went, and when it was Dad’s turn, he would ski all around the island with a lit cigar in his mouth! Ken

~When I count my blessings in life, I thank God for my father and mother. Devoted to each other and their children, they provided a safe and loving home that I am grateful for. As a child, I took it for granted, as an adult I realized we were the exception rater than the norm. Dad was compassionate about many things and eager to involve himself, demonstrated kindness to all, and over a lifetime set an example for doing good deeds for others. I look forward to being able to extend his kindness to others in his memory. Brent

~I had the privilege of being the first grandchild, I remember a big, strong loving man that picked us up gently and let us sit in his lap, I remember watching Heehaw as a family and homemade ice cream under the big tree. I remember when he cut the watermelon he always tested a piece of the heart to make sure that it was “good”, I remember that he never gave up on me and he has instilled a passion for helping others in me that will live forever. I remember a great Granddaddy who took care of everyone….Thanks for loving me Granddaddy…. Angela

~My favorite memory of my grandfather is him bringing everyone to Texas for Christmas in the RV. The RV was loaded with presents but he also brought us tons of Wise potato chips and Sun Drop. Things we could not buy in Texas. Melanie

~My granddad always taught me the important lessons of forgiveness and moving on. Especially when you did not follow his direction. When I was 11 years old, granddad gave me the passage to manhood and allowed me to drive his riding lawnmower. I then proceeded to drive the lawnmower through the neighbors fence. He then instructed me to go inside and help grandma. When I was 14 years old, I was helping him load a storage building to deliver to his customer. I was responsible for watching the left side of the building as he loaded it, and I was distracted by something more interesting. The building hit the corner of the transmission shop and damaged the roof of the storage building. After confirming I was supposed to watch that side of the storage building, we unloaded the building and reloaded a larger, more expensive on