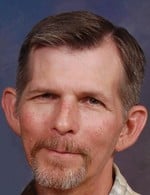 Dennis Keith Jarrell, 48, was called into the arms of Jesus on August 27, 2009 after a brief, but courageous, battle with cancer.

A native of Wilmington, Dennis is survived by the love of his life, his wife, Cindy L. Jarrell, his daughter Jennifer Christian Jarrell-Wilson and husband Matt of Atlanta, Ga. and his son Eric L. Jarrell and girlfriend Jessica Figgins of Wilmington along with his three dogs Angel, Littledog and Lotus. He is also survived by his loving parents father Rudy A. Jarrell, Jr. and wife Carolyn, mother Patricia T. Brehmer and husband Ray, brother J. Daniel Jarrell and wife Harriette, sister Tammy L. Ragan and husband Sam, step-sister Julie R. Saltsgaver and husband Brian, step-brother Kenneth R. Brehmer Jr., many special aunts, uncles, nieces and nephews, and an extra special mother-in-law Helen Smith. Preceding him in death were his grandparents, Rudolph and Hazel Jarrell, Sr., and Leon and Eloise Teachey. Additionally, Dennis is survived by very special and devoted long time friends Jamie Roderick and wife Beth, Tim Nichols and wife Robin who were instrumental during his life and are considered family.

His covenant with God gave him the strength and courage to fight this battle with an amazingly positive outlook. God was his first love followed by his wife Cindy and their two children.

His passions in life included his motorcycle and Jeep Rubicon. He also loved to travel which carried him to 46 of the 48 contiguous states, Mexico, and most of Canada. His latest trip with Cindy was by motorcycle that carried them as far as Newfoundland. While stationed in Europe he traveled to every country including Denmark, Switzerland, France, East and West Berlin, and many more.

Dennis was a Computer Software and Web developer at VisionAIR of Castle Hayne which designs public safety software and is used by Law Enforcement agencies across the United States. In recent years his design work was for churches, doctors, and lawyer offices.

The family will receive friends and visitors at Wilmington Burial and Cremation Service, Monday August 31, 2009 from 6 p.m.-8 p.m. A service celebrating his life will be held at Pine Valley Church of God, 3810 Shipyard Blvd in Wilmington, Tuesday September 1, 2009 at 2 p.m., and other times at his home. A graveside service will follow at the Friendly Lane Community Cemetery on Masonboro Sound. A gathering celebrating his life will follow at the old Jarrell home located at 330 Friendly Lane.

In lieu of flowers, donations can be made to Lower Cape Fear Hospice, 1414 Physicians Drive, or in memory of Dennis please visit www.livingwaters.com to purchase an Evidence Bible. Special gratitude is offered by the family to the Veterans Administration whose assistance was invaluable, as well as, Beth Cook nurse at Lower Cape Fear Hospice.

Online condolences may be made to the family at www.wilmingtonburialandcremation.com