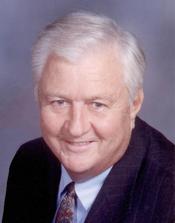 Mr. Traflet was born October 24, 1936 and was raised in Butler, NJ. He attended St. Anthony of Padua Catholic School and Butler High School and graduated from Villanova University with a B.A. and Fairleigh Dickinson University with an MBA. Prior to moving to Henderson, NC, Mr. Traflet lived in Wilmington, DE, Bowie, MD, and Livingston, NJ. He was a member of the US Navy and served aboard the USS Independence. He was a 3rd Degree member of the Knights of Columbus. Mr. Traflet was the VP of Sales for Montair Industries. He was a member of St. Mary Catholic Church in Wilmington, NC.

He was the husband of Margaret “Peggy” Traflet and the father of Donald Traflet , Jr., Michael and Donna Traflet, and Gary and Lisa Traflet, all of Wilmington. He was also the grandfather of 5 including Zachary Traflet, Caroline Traflet, Lauren Traflet, Meredith Traflet, and Kiersten Spence. He was preceded in death by his father and mother, Frederick Emil and Alice Tintle Traflet of Butler, NJ and a brother, Robert F. Traflet, of Elmwood Park, NJ. He is survived by his sister, Margaret Traflet Tintle, of New Carrollton, MD. He is also survived by 10 nieces and nephews.

A Funeral Mass and Celebration of Life is being planned for Saturday June 9, 2012 at St. Mary Catholic Church. The family will be at the home after the service to greet friends.

In lieu of flowers, memorials can be made to St. Mary / Tileston Outreach, 412 Ann Street, Wilmington, North Carolina 28401.

The family would like to thank the members of St. Mary Catholic Church, Harbor United Methodist Church, the staff of DaVita Dialysis Center of Wilmington, Patrick O’Connell, PA and their friends and neighbors, in the Fairfield Park neighborhood, for all their love and support.