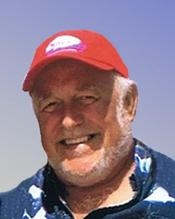 Donald “Don” James Millar 68, of Hampstead died Tuesday at his home with his family at his side.

Family and friends will gather at 2:00 PM Saturday, February 12, 2011 at Soundside Park, Surf City
followed by a celebration of life at Gilligans, Surf City.

Don was born in Syracuse, NY, lived in Buffalo, NY until 17 years old, then travelled the world for four years as a fighter aircraft weapons specialist in the USAF.

He earned a BFA from the State University of New York at Buffalo, and did his post-graduate work at Syracuse University. After college, he moved to Norwalk, CT, and remained there for almost 30 years. He recently moved and lived near Wilmington, NC.

He was a artist, boater, fisherman, and admirer of the Southeast Coast of the U.S.A. as well as the shores of New England along with seacoasts and lakeshores throughout the world. For the past 12 years, he lived in the small coastal town of Hampstead, North Carolina and thought of it as paradise.
After a varied and successful career as a freelance advertising art director/designer in the medical/pharmaceutical industry for more than thirty years, Don decided it was time to stop and smell the salt air.

His love of drawing, boating and the sea were ingrained and as a second career, he made charcoal drawings of lighthouses and fishing boats.

He is the father of two children, Heather Quintana and husband Mark of Roanoke, VA, Andy Millar of Ocala, FL., two grandchildren, Matthew Quintana and Jack Quintana whom he loved very much. He also leaves behind the love of his life, Cheryl Mallard, and two brothers, Doug Millar and Brian Millar, stepmother Betty Millar and an abundance of friends around the world.

The family requests memorial contributions be made to The Leukemia Society of America.