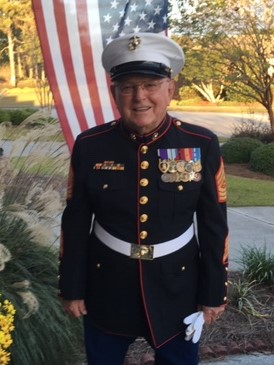 The youngest of eight sons, Donald was born in Brooklyn, NY, on January 27, 1932, to Henry Vincent Kane and Anna Donahue Kane.

Don was a career Marine serving his country all over the world as a Comms Chief. He is a veteran of both the Korean War and the Vietnam War and he was a Purple Heart recipient. He retired from the Marine Corps after 22 ½ years of faithful service in 1971. He held true to the Marine Corps motto Semper Fidelis (Always Faithful), attending the Drill Instructor reunion and Marine Corps Ball every year with his wife Robin. Upon retirement from the U.S. Marine Corps, Don pursued a career with the U.S. Post Office in Mount Sinai, New York, where he retired after a 20 year commitment in 1994.

Don’s zest for life was contagious, and he was always the life of the party. He was known as “Uncle Don” in Mount Sinai, and as “The Godfather” of his neighborhood. Don was happiest tending his garden and spending time with his family and friends. Don was renowned for his storytelling. His big heart encompassed everyone he met, and he always made you feel loved, no matter what.

The greatest gift you’ll ever learn is just to love and be loved in return. ~ Semper Fidelis ~

Don is preceded in death by his son, Timothy J. Kane of San Antonio, TX

In lieu of flowers, Don’s wish would be to support his fellow Marines with contributions to the Semper Fi Fund.