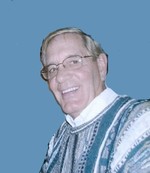 Donald was 68 years old at the time of his death. Donald was born on March 9, 1941 in Holland, Michigan to Nicholas and Jessie Nyenhuis.

He was a graduate of Grand Rapids Christian High School and attended Davenport College of Business in Grand Rapids, MI. Donald was self employed as a salesman in the medical field. He was an active and long time member of Myrtle Grove Evangelical Presbyterian Church serving as an elder and choir member.

A memorial service will be held on Thursday, March 19 at 11:00 at Myrtle Grove EPC, Pastor Ron Roughton officiating. Visitation will be held one hour prior to the service.