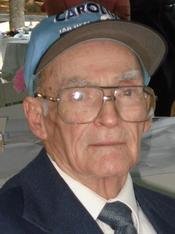 Donald Ray White, Sr. of Leland, N. C., peacefully went home to be with his Lord on December 16, 2011 at the Lower Cape Fear Hospice & LifeCareCenter.

Donald Ray was born in Leland, NC, on June 12, 1931, the son of the late James Thomas and Katie F. Woodcock White.

Mr. White served in the U.S. Navy during the Korean Conflict. He retired as the Terminal Manager of Tenneco Oil Company in Wilmington, NC after 23 years of service.

Mr. White was the founder of Little League Baseball in Leland, NC. He organized and coached from 1959 until 1975 Leland’s first little league team and joined the Wilmington Good Neighbor League, where they successfully competed. From 1976 until 1992 he was the first President of Leland Dixie Youth. In 1979, he brought the Dixie Youth World Series to Leland, this led to the renovation of the entire ball park complex.

He was a member of Faith Baptist
Church in Bolivia, NC. Where he faithfully attended and taught the adult men’s class. He was formerly a member of the Buck Horn Hunting Club. His hobbies were hunting and gardening.

The funeral service will be held at Elah Baptist Church, Old Fayetteville Road, Leland, NC, on Sunday, December 18, 2011 at 3 PM.

The family will receive friends one hour prior to the service at the church. The service will be officiated by Rev. W. Earl Hewett, and Rev. John M. Sellars. Interment will follow in the Nelson Cemetery, Leland, NC.

In lieu of flowers, memorials may be made to Lower Cape Fear Hospice, 1414 Physicians Dr.Wilmington,NC 28401.