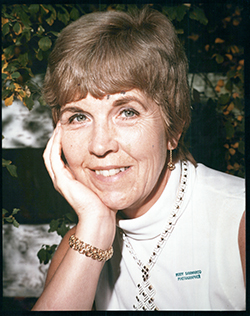 Doris Caroline Sammarco, 94, of Leland, NC passed away peacefully on Friday, May 28th.

Doris raised her son as a single mother before that was common, modeling unconditional love and resilience. She worked as a Secretary for Bristol Babcock in New York City. When Doris met Rudy in 1972, they quickly became a couple and married the following year. Their first home was in Fair Lawn, NJ. When Doris and Rudy retired, they sold that home and moved into their “weekend home” in the Poconos. With not enough to keep them entertained, they sold the Pocono home and moved to a 55+ development in Belvidere, NJ, but because they never thought of themselves as being over 55, they moved again to a single family home the sunshine state of Florida. And although they loved it there, Florida was just too many miles from family, so they moved again to Virginia (to narrow the gap) and then somehow, moved again, finally settling in beautiful Leland. Anyone would think that with so many moves, these two were in the witness protection program! But actually, they were making and collecting friendships along the way. Doris took a genuine interest in almost everyone she has ever met and her memory is one to be admired! She is absolutely incredible! Right up until last week, Doris was still reaching out to friends from all over the states! That being said, Doris will be missed by so many.

In lieu of flowers, donations can be made to the Lower Cape Fear LifeCare Foundation at 1414 Physicians Drive, Wilmington, NC 28401.