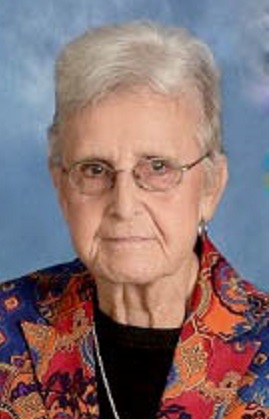 Doris Garner Ayers, age 81, of Wilmington, NC passed away Tuesday, August 16, 2016. She passed away very quickly with her daughter by her side immediately after receiving a massage.

Doris was a native of Wilmington born on February 25, 1935. Her parents were Aden Ray Garner and Verma Leitch Garner. Doris was the widow of J.T. (James) Ayers. She lived in Raleigh, NC for 7 years and Greensboro, NC for 24 years, then moved back to Wilmington in 1998. She retired with 36 years of service with the IRS, as a tax auditor and appeals officer.

Doris was a longtime member of St. Andrew’s on-the- Sound Episcopal Church. She was very active in church activities including Circle of Friends, Episcopal Church Women, Cemetery Committee, Endowment Fund Committee, and she sang in the choir until 2016.

When moving back to Wilmington in 1998, Doris jumped in with both feet and became quite involved in community activities. She was a member of the Cape Fear Garden Club for 15 years. She served as co-chair of the Airlie Showcase Garden Committee for 13 of those 15 years. She also sought out and procured gardens for the Secret Garden Tour many years walking many blocks around the city of Wilmington. She also served on the Airlie Garden Foundation.

One of Doris’ biggest and proudest accomplishments was Co-Chair of the WWII Wilmington Homefront Heritage Coalition with Wilbur Jones, and restoration of the Hannah Block USO.

Doris is survived by two daughters, Doane Bridges and Kim Booth; a special cousin who was like a sister to her, Awilda Locke and her husband, Fred Locke; and her special partner and companion, Tessa, an eight pound poodle.

A memorial service will be held at 11 am on Saturday, August 20, 2016 at St. Andrew’s on- the-Sound Episcopal Church officiated by the Rev. Richard Elliot. A reception will follow the service in the church Parrish Hall.

To honor Doris consider a memorial gift to St. Andrew’s on-the-Sound by visiting www.tmcfunding.com in lieu of flowers.