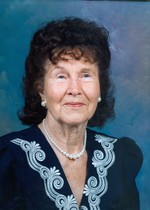 Born during the Great Depression Era in a rural farming community in eastern North Carolina near Faison, she was the daughter of the late Jonah and Mrs. Ella May Baker Jackson.

She was one of many women entering the workforce after WWII. She retired from the DuPont Company in Kinston, NC after 30 years of service as a laboratory technician.

Never one to sit still for very long, Dorothy moved to Castle Hayne, NC in 1983 and went to work at J.C. Penney as a retail associate for 6 years. She also volunteered at New Hanover Hospital and became a lifelong member of Wrightsboro Baptist Church. For the next ten years she was a professional extra with Fincannon Studios of Wilmington, fulfilling her dream of being in movies. She appeared in 11 episodes of the Matlock Series as the Court Stenographer and in numerous episodes of Dawson’s Creek and One Tree Hill. Some of her movie appearances were in “Muppets from Space”, “ Black Knight “ and “Out of Carolina.” Dorothy always described this period of her life as the happiest. During her remaining years she carried on with helping others and applying her amazing green thumb to growing the flowers and plants she always loved. Her caring heart continued to adopt and feed the neighborhood kids, cats, dogs, wildlife and birds and inspire those who knew her. She was affectionately called “ Miss Movie Star Dot “ by her friends and loved ones.

Online condolences may be sent to www.wilmingtonburialandcremation.com.