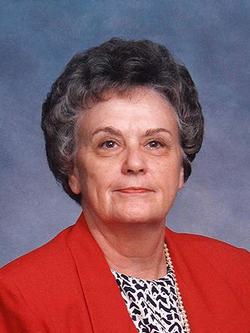 A nearly six year resident at Davis Health Care Community, Dorothy battled Parkinson’s disease ,which took her from normal family, Church, and business activities; all of which she loved so dearly.

Dorothy’s family was small, but she loved each of them as differently as their own personalities. She favored the neediest and felt a calling to help them as much as possible. In fact, her extended family included anyone she met with a need. She often asked, new and old, family and friends to stay for dinner and then she would way over cook, making sure at least two pans of biscuits were hot from the oven, seducing all the senses of those in attendance and nourishing her guests with her warm nature and casual conversation.

Dorothy and James Coleman Edwards (deceased February 16, 1990) were married January 8, 1947. Although they gave birth to only one child, Janet Kaye Edwards, many of Jan’s friends came to know Dorothy as “Mama Dot” and were at home when visiting or staying over because Mama Dot would do for them as much as she would for her own daughter.

Dorothy attended Winter Park Baptist Church. Her Sunday School class, Circle of Friends, was aptly named, evidenced by the closeness of each of the class members. They enjoyed dining out together, as much as helping one another when called upon. Even after entering The Davis Health Care Community, her Circle of Friends, continued to remember Dorothy with regular visits, calls and cards.

In business, she retired from Cape Fear Memorial Hospital, where she made many lifelong friends, who remained loyal with all the benefits friendship brings, throughout her residency at The Davis Health Care Community.

Dorothy loved a drive out to see what’s new in the community. She enjoyed family and friends traveling in a tour group. She traveled all four compass directions and always returned with a better understanding of humanity. She loved working in her vegetable gardens over the years, and maybe more, she loved the rewards of producing a fresh alternative for her dinner table. She loved her neighbors and enjoyed their times together whether gardening, sewing or just visiting. She never had a bad word for anyone. With her, everyone always got the benefit of doubt, unless they were in it red-handed; then they got another chance.

All these things in Dorothy’s character were innate, but further influenced and nurtured by her love and belief in God. She was a witness to her Faith by the examples she set.

Thank You, God, for Dorothy Tyndall Edwards, born October 13, 1927 in Dillon County, South Carolina. Her parents were Luther and Nellie Mae Wilkes Tyndall. In addition to being preceded in death by her parents, also, her brothers: L.T. Tyndall, Brantley Tyndall, and Carl Tyndall; her sisters: Betty Lou Tyndall and Dorene Tyndall Ivey.

In lieu of flowers, please make a donation, in memory of Dorothy Tyndall Edwards, to Lower Cape Fear Hospice, 1414 Physicians Drive, Wilmington, NC 28401 where your thoughtfulness will do the most good for those in need.