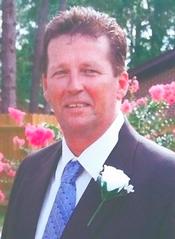 Douglas “RAY” Brownie, age 54, of Leland, NC went to be with his LORD & SAVIOUR on Saturday, October 15, 2011 after a long battle fighting cancer.

A native of Wilmington, Ray went straight from high school & enlisted in the United States Navy on a four year term. After marrying his soul mate they eventually moved to Coats, NC. There he engaged in pursuing a career in Law Enforcement, Fire & Rescue. With a heart of gold in doing for others and yet a strong willed man, he stood his ground in all that he believed in. His love, devotion, & dedication he expressed as a loving & caring provider, in the many titles he carried. Especially the titles of husband & father. A survivor and determined to beat the disease in which took his life. His favorite quote was, “Go to the Light”. A figure of speech in which he would tell loved ones that has gone on before him. Riding his motorcycle, using his hands as tools to create projects such as on cars & the most famous “honey do” list. His passion was fishing, in which he stated it was then that he felt closest to God. His calling in life lead him to working at Wilmington Funeral & Cremation of Wilmington where a celebration of his life will be held there on Tuesday October 18, 2011 at 2 p.m. in the Funeral Chapel. Officiating will be Evangelist Kimberly Michael.

The family would like to extend their thanks to Brunswick County Hospice (Dan, Kim, & CeCe) & Doug Bevell in being a very good & supporting friend and his staff for providing quality care.

The family will accept friends & family at the home and after the services.

In lieu of flowers donations can be made to Brunswick County Hospice in Memory of Ray.