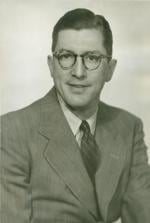 Dr. Stahl was born in Philadelphia, PA. March 8, 1913 the son of the late Conrad and Emma Trimborn Stahl, and was proceeded in death by his first wife Ruth Catherine Stahl.

He received his BS from Pennsylvania State University and his PHD in Bio-Chemistry from Michigan State University in 1939. He worked for the Government as Arms Quartermaster during and after the war in the scientific research department, and for over 20 years was director of Research and Development for McCormick and Company in Baltimore, MD.

Following his marriage to Frances he relocated to Memphis, Tennessee where he spent his active retirement years, and they traveled extensively for pleasure. He worked on numerous projects worldwide as a representative of the Service Corp of Retired Executives. His time was also given to the Memphis Kiwanis, the English Speaking Union (President), Meals on Wheels, and similar organizations.

There will be a graveside service at Sherwood Church in Cockeysville, Maryland, and a memorial service will be held in Memphis, Tennessee at a later date.